The registration fee (the actual name and email of the delegate should be mentioned in their registration) is based on the date of registration and payment. If you want to benefit from the lower fee, register early and pay by the deadline. Registration without payment by the deadline will be automatically updated to the next deadline’s fee. Ideal, PayPal, by Credit Card and direct bank transfer through the invoice option.

Registration fees and conditions for payment

If you are unable to attend, you need to notify us by sending an e-mail with your name and registration confirmation to Lucienne.dado@eu-robotics.net

If your cancellation reaches us:

You may propose a replacement participant at a  €30,- administrative fee

Abstract
This talk will address some key decisional issues that are necessary for a cognitive and interactive robot which shares decision, space and tasks with humans. We adopt a constructive approach based on the identification and the effective implementation of individual and collaborative skills. The system is comprehensive since it aims at dealing with a complete set of abilities articulated so that the robot controller is effectively able to conduct in a flexible and fluent manner a human-robot joint action seen as a collaborative problem solving and task achievement. These abilities include geometric reasoning and situation assessment based essentially on perspective-taking and affordances, management and exploitation of each agent (human and robot) knowledge in a separate cognitive model, human-aware task planning and interleaved execution of shared plans. We will also discuss the key issues linked to the pertinence and the acceptability by the human of the robot behaviour, and how this influence qualitatively the robot decisional, planning, control and communication processes.

His main research contributions fall in the fields of Robot Decisional and Control Architectures, Task and motion planning, multi-robot cooperation, and human-robot interaction. 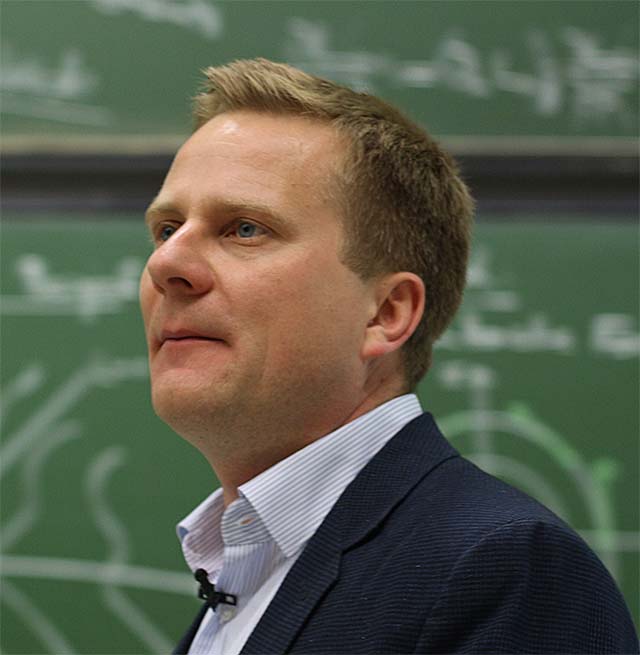 Frederic P. Schuller is an expert on the applications of differential geometry in physics and engineering. He obtained a Master of Advanced Studies in Mathematics and a PhD in Applied Mathematics and Theoretical Physics from the University of Cambridge, working in S. W. Hawking’s general relativity group with G. W. Gibbons. He was subsequently a Postdoctoral Fellow at the Perimeter Institute for Theoretical Physics in Canada and a Researcher at the Albert Einstein Institute (Max Planck Institute of Gravitational Physics) in Germany and held professorial positions in various countries before moving to an Associate Professorship at the Department of Applied Mathematics at the University of Twente. For his internationally known advanced lecture courses on differential geometry, quantum mechanics and general relativity and his supervision of research students he received numerous awards, including the 2016 Ars Legendi Prize as Germany’s top physics lecturer.